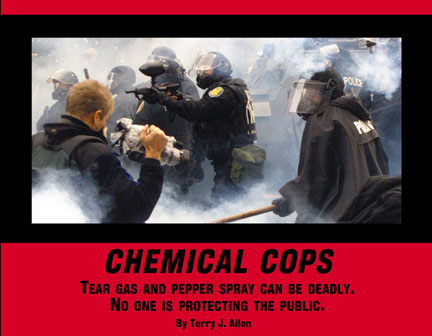 Tear Gas And Pepper Spray Can Be Deadly

The tons of tear gas and pepper spray munitions Seattle police used on demonstrators and bystanders alike at the anti-WTO demonstrations last December contained chemicals implicated in lung problems, eye damage and even death. Contrary to conventional wisdom, the effects of these chemical weapons are not always confined to 15 or so minutes of intense pain and incapacitation. According to manufacturers’ documents, military research and medical literature, each of these agents carries short- and long-term health risks; various formulations contain potential carcinogens.

Tear gas and pepper spray cause health problems even when used within guidelines on healthy people. But in Seattle, as elsewhere, law enforcement violated manufacturers’ warnings and inevitably sprayed vulnerable populations such as people with diabetes, asthma, allergies or heart problems, as well as pregnant women, children and the elderly. “It was like a war zone,” says Russell Sparks, a student from Bellingham, Washington, who helped block a Seattle intersection on December 1. “The police rolled up in humvees, and I heard the clink, clink of cops jogging toward us. Within seconds the area was filled with gas and the air was pure white all around. I coughed and coughed. I felt like I was on fire, my friend and I both became hysterical. He fell down. A middle-aged man near me passed out, eyes open, shaking, dry heaving, twitching in the shoulders. A woman passed out face down. I tried to help but my eyes were burning and I was screaming for medical help.”

Three days later, Sparks still felt “serious flu symptoms, phlegmy, tired, fatigued, problems with eyes focusing, burning, slightly nauseous. I felt like it went into every pore.” He wasn’t alone. The persistence and severity of symptoms widely reported by demonstrators and hapless bystanders gave rise to speculation that some “mystery gas” had been used. Rumors of nerve gas spread like a toxic cloud across the Internet.

The truth is that tear gas and pepper spray alone can cause temporary blindness, respiratory problems, vomiting, diarrhea, fatigue and disorientation. Symptoms may linger for days in otherwise healthy individuals. Out of 187 North Carolina corrections officers exposed to pepper spray under controlled conditions for training purposes, according to Duke University Medical Center study, eight had symptoms persisting for more than a week, including eye problems, chest problems, headaches and disorientation.

More seriously, reports by the Army and in prestigious medical journals have warned of respiratory arrest, pulmonary edema, and acute elevations in blood pressure associated with risk of stroke and heart attack. Military and industrial sources also point to the possibility of cancer, birth defects and DNA damage from these chemical weapons.

While tear gas and pepper spray are banned from use in war by an international treaty, domestic use is legal and nearly ubiquitous in the United States. The advantages of these “non-lethal” technologies, police say, include fewer deaths and serious injuries to officers and suspects, a more benign image for departments and less litigation. Currently, more than 90 percent of the country’s police departments issue pepper spray to their officers, according to the Justice Department, and many departments store tear gas for use in crowd control or riot situations.

Despite widespread use, none of the agents sold for police purposes is monitored, tested or regulated by any government agency for consistency, purity, toxicity or even efficacy. Dr. Howard Hu, a Harvard University epidemiologist, says that the extent of ill effects from these chemicals is unknowable since there have been no rigorous, independent follow-up studies on exposed populations. Little has changed since 1989, when Hu wrote in the Journal of the American Medical Association, “There is an ongoing need for investigation into the full toxicological potential of tear gas chemicals and renewed debate on whether their use can be condoned under any circumstances.”

Because they are treated as weapons, police-grade products “fall between regulatory cracks,” says Raymond Downs, program manager in science and technology at the National Institute for Justice. “Police are at the mercy of manufacturers,” Downs adds, in that they have to rely solely on makers’ claims for the safety of the chemical weapons themselves and for the wide variety of solvents and propellants routinely added to turn the active ingredients into aerosols.

Those claims may not be all that reliable. In a 1995 report, the Army warned that “manufacturer literature … is often misleading, incomplete or inaccurate,” and in some cases “manufacturers refuse to disclose the components of [their] products.” Indeed, Def-Tec, one of the country’s largest suppliers, declines to release information on concentration of pepper and tearing chemicals in its dozen products deployed in Seattle. It also won’t disclose which solvents or propellants were incorporated, except to refer to three generic product-safety data sheets that the Seattle police are required by law to release.

When it comes to health aspects of any of the chemical weapons, used either singly or in combination, Downs notes, “there is almost no independent research going on.” “They all spin the data,” adds one federal official. “One manufacturer will say the other’s is toxic, but mine is just fine.”

Zarc International, which makes only pepper spray products, charges in its literature that the tear gases its competitors make promote cancer and cause allergic reaction and eye injuries. Def-Tec, a division of Armor Holdings, which manufactures both pepper spray and tear gas, denies any safety problems. “We know of tens of thousands of times that these have been deployed without any incident,” says Dave Dubay, director of research for the Casper, Wyoming-based company.

It is not just manufacturers’ data that have been called into question, but also the federal government’s. After the FBI endorsed pepper spray in 1987 as an “official chemical agent,” it was added to the arsenals of most police agencies and largely replaced tear gas. At the FBI, the Johnny Appleseed of pepper spray was special agent Thomas Ward, director of the Quantico Firearms Training Unit and the bureau’s chief expert on pepper spray. Ward, who supervised, approved and guaranteed the chemical weapon’s quality and safety for the FBI, also wrote the main bureau study cited by law enforcement agencies to defend its use. He promoted pepper spray in a widely disseminated official FBI training infomercial. Then, in February 1996, Ward pled guilty to a felony for accepting a $57,500 kickback from Luckey Police Products, the country’s second largest manufacturer of pepper spray, whose weapons Ward had touted as an FBI trainer as far back as the mid-’80s.

While police rely on manufacturers for safety assurances, the public relies on police to define when use of chemicals weapons is a safe, appropriate response. The International Association of Chiefs of Police issues “use of force” recommendations for various weapons, but individual departments around the country set their own guidelines and enforce them with varying degrees of rigor.

Seattle police, for example, are authorized to use chemical weapons against people engaged in peaceful civil disobedience. Boston police can only use pepper spray in self-defense against a violent physical assault or when an officer trying to make an arrest is in danger of being injured or losing custody of the suspect. In the case of passive resistance, says Gary Eblan, defensive tactics instructor at the Boston Police Academy, “We would have four officers lift and take the subject to a holding area or wagon.” Washington, D.C. may face crowd control situations similar to those in Seattle when demonstrators descend on the nation’s capital in April for meetings of the IMF and World Bank. The Metropolitan Police Department is training 1,400 officers for crowd control and stocking up on chemical weapons and rubber bullets. Planning is underway to coordinate response with several federal agencies, including the FBI, U.S. Park Police, U.S. Capitol Police, Secret Service, U.S. Marshals and Federal Emergency Management Agency. The Metro Police Department refused to release its written guidelines for “use of force.”

Police guidelines and manufacturers’ standards inevitably vanish in thick air under real life conditions. When deploying chemical weapons on crowds, police have no practical way to monitor those sprayed, to screen out people with risk factors, or to avoid bystanders. Nor can they quickly decontaminate those affected. “Responsible police have a saying: ‘When you spray them, you own them,’ ” Downs says. “There is a requirement for aftercare. You need to make sure if they need medical attention, they get it. In the military, if a few limp away, we may not care. In the civilian world, aftercare is essential.”

Manufacturers also warn against deploying chemical weapons in closed spaces–a warning notoriously violated, with fatal consequences, by U.S. law enforcement in the Waco, Texas siege of the Branch Davidians. The American Civil Liberties Union and other groups have documented numerous instances in which pepper spray was used by police as a form of “street justice” to mete out pain and punish unruly or uppity suspects after they already had been subdued. U.S. prison guards routinely use chemical weapons to perform “cell extractions.”

Excessive exposure–both accidental and intentional– is another problem. An internal report by Def-Tec cautions that more than a single, one-second burst of pepper spray “obviously would be an overexposure, which may cause added health risks.” And manufacturers recommend that police hold the spray at least several feet from a subject’s face to avoid eye damage.

Yet videotape clearly shows instances in Seattle in which police held aerosol cans within inches of the faces of seated protesters and sprayed them repeatedly or in long bursts. “My impression was that most Seattle police officers handled themselves with some restraint, but some didn’t,” says Larry Gossett, a member of the King County Council. “We got too many reports from people handled in a brutal way for all of them to be false.”

An additional risk in situations such as Seattle–where police admitted spraying crowds with multiple chemicals–is that “there has been no research on the synergistic effects,” Downs says. Maryland-based Zarc International charges that “mixing [pepper spray] and other chemical agents such as [tear gas] … can prove to be harmful or even fatal in real-life situations.” The probability of adverse side effects is only exacerbated by the addition of solvents and propellants–some of which are themselves toxic or carcinogenic–to the active ingredients to turn them into effective aerosol weapons.

Despite the dangers and drawbacks of tear gas and pepper spray, most critics are careful to differentiate between one-on-one use by a disciplined, trained officer who is physically threatened and wide dispersal on large and varied crowd of generally peaceful protesters. When judiciously used, chemical agents can immediately incapacitate a belligerent suspect with far less risk of permanent or serious damage than a bullet or a baton blow. “If an officer is faced with a situation in which his life is at stake, it makes sense to respond in a way that will leave both people alive,” says Lew Pepper, a physician at the Boston University School of Public Health. “But there is no justification for use of toxic and potentially cancer-causing agents for crowd control for civil disobedience. There are better ways to deal with political speech.”

There are also better ways to serve and protect the public than to deploy inadequately tested, unregulated chemical weapons. Unless there is independent research establishing that these weapons are reasonably safe, and until there is credible oversight of police practices and manufacturers’ claims, the public has no way to assess how much risk it is accepting in the name of law and order.

Terry J. Allen is a contributing editor of In These Times. Support for this article was provided by the Fund for Constitutional Government.